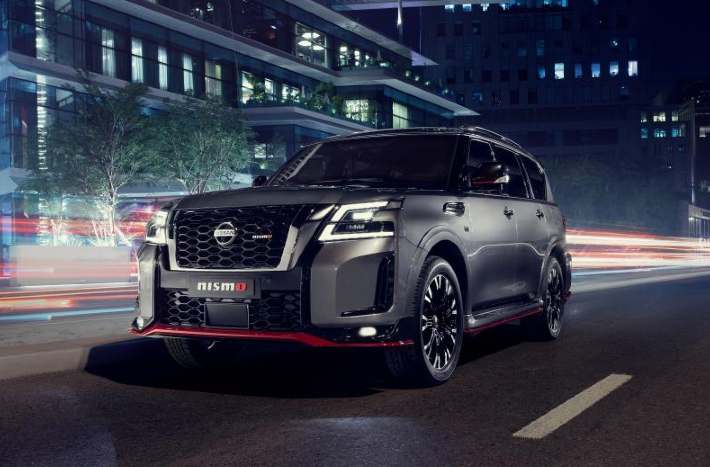 After making a global debut in September 2019, the Japanese carmaker has finally revealed the 2021 Nissan Patrol Nismo. With an aggressive look than the standard model, the new Nissan packs more power and upgrades for buyers.

The new version of Nissan’s flagship comes with a few styling tweaks. The car looks meaner, with its latest front bumper taking a major centre intake, while the rear bumper gets faux diffusers and a Formula E-style centre-mounted LED stoplight.

The 2021 Nissan Patrol Nismo comes with a honeycomb grille and blacked-out bits, which were missing on the standard Patrol SUV. The car also gets sporty side skirts with red and black accents.

On the inside, you will see dual 8.0-inch touchscreens, HVAC control, dashboard with faux carbon fibre trim, wireless charging system, and red and black seats with Nismo badging.

To speak about power train, Nissan Patrol Nismo gets a 5.6-litre V8 engine producing 428hp, which is 28hp more than the standard Patrol. The SUV gets suspension upgrades, including Bilstein components, and stands tall on 22-inch wheels.

The new Patrol Nismo SUV is already on sale in the Middle East. There is no update of it hitting the Indian roads soon. The company showcased the standard Patrol in India a few years ago, but it did not go on sale here.